Marvel’s 2018 Box Office hit Black Panther broke the glass ceiling for Black filmmakers. Seeing an almost entirely Black cast on silver screens in a narrative that is far from tragedy-porn was and still is revolutionary. In retrospect, however, the film foregrounded just how neglected Africa’s political and social issues are while African cultures are celebrated and exploited by western societies. For example, the film uses generalised African accents from all over the continent instead of a specific regional accent. Although a seemingly small issue, imagine if characters in any other Marvel film all spoke with different accents despite supposedly being from the same place. It would be extremely ignorant for producers to leave the inconsistency. Yet no one bats an eyelash when Africa is misrepresented.

This issue is not a new one, but it was briefly trending on Twitter this summer when Beyonce released her visual album Black is King. To say the album was influenced by African cultures would be an understatement. The choreography, costumes, locations and musical style were all very Afrocentric. Although this, much like Black Panther, is worth acclaiming, Beyonce exhibits a Western entitlement to take what is desired and leave any collateral damage behind. Firstly, she wore a traditional Nigerian headwrap called a Gele which was understandably criticised as cultural appropriation. Criticism increased as the rise of protests against The Special Anti-Robbery Squad (SARS) in Nigeria for police brutality increased. Beyonce among other artists did not initially speak out against SARS which was not well received by either dedicated or casual fans. To add to the case against her, Beyonce does not tour Africa at all. This encapsulates the duality of selectively interacting with African countries dependent on whether or not there’s a profit. Rapper Noname joined the conversation highlighting this. 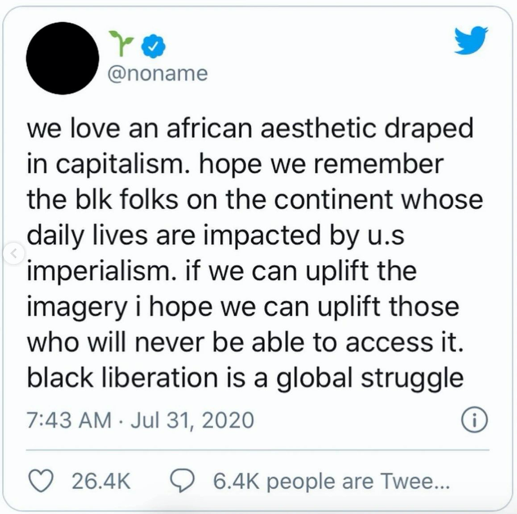 As with most societal concerns, this topic runs deeper than just celebrities. The media perpetuates the narrative of a continent which is unsalvageable and is only useful for creating shocking depictions of human suffering. It’s interesting that this primarily takes the form of charity adverts and not necessarily in politically induced instances of suffering. Mainstream media often fails to properly and urgently cover stories that would usually demand media coverage. The country of Zimbabwe is one that has been neglected by Western media. In late July the citizens of Zimbabwe had anti-government protests and corpses became a usual sight in the streets. Writer and human rights defender Thandekile Moyo wrote on the 5th of August 2020 an article titled:  ‘Zimbabwe is on fire but is the world listening?’

To answer his question, the world is not listening, but not because they don’t want to. Instead, it is because those in charge of distributing information barely give any African country a few minutes of coverage. In fact, if an issue is covered, it is only shown in the written or print version of the media company, as if to rid themselves of the responsibility. It’s saddening to see the same neglect of human lives evident in the colonisation of Africa taking new forms except for this time the Western world is fighting for Africa’s cultural resources, be it fashion, hair, makeup or music. What makes the scramble for African cultures especially exploitative is that they are not simply a result of natural cultural assimilation but a textbook definition of exploitation. This exploitation is built on the common belief that Africa is unimportant.

Military Analyst James Marks made this explicit in 2015 when he was asked whether the USA would offer assistance during the Boko Haram massacre in Nigeria. His response, although painful to hear, was nothing short of the truth. Africa is simply not a priority, well, Africans are not a priority. The continent itself is clearly adored for its cultural assets. Black Panther became one of the highest-grossing superhero films of all time and Black Is King was heavily acclaimed in pop culture. it is, therefore, clear that the West’s relationship with Africa is still rooted in exploitation.